A vector space, known also as a linear space, is a collection of objects (the vectors), which may be added together and multiplied by some scalar (a number). In machine learning we use vectors all the time. Here are some examples:

Let’s see what does it mean for a vector space to have a norm.

Informally, a norm is a function that accepts as input a vector from our vector space \(V\) and spits out a real number that tells us how big that vector is. In order for a function to qualify as a norm, it must first fulfill some properties, so that the results of this metrization process kind of “make sense”. These properties are the following. For all \(u, v\) in the vector space \(V\) and \(\alpha\) in \(\mathbb{R}\):

One of the most widely known family of norms is the \(\ell_p\) norm, which is defined as:

Every \(\ell_p\) assigns a different “size” to vectors and the answer to the question on what’s the best \(\ell_p\) norm to use, depends on the problem you are solving. For example, if you are building an application for taxi drivers in Manhattan that needs the minimal distance between two places, then using the \(\ell_1\) norm (purple) would make more sense than \(\ell_2\) (green). Because the \(\ell_2\) distance “is not accessible” to a taxi driver, as s/he can only navigate through the purple roads. But if the same app was meant to be used by helicopter pilots, then the green line would serve them better. Here I’m mixing the notions of norm (“length” or “size”) and metric (“distance”), but you get the idea. 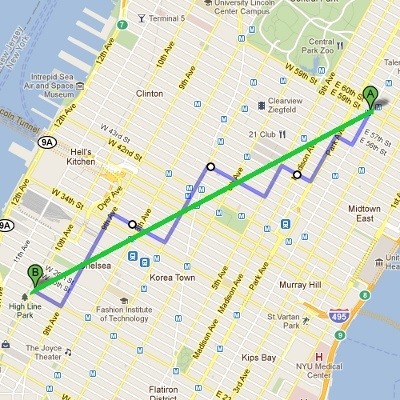 If you expand the squares and simplify the inequality, you will end up in a false statement.

Let’s see two applications of norms in machine learning, namely regularization and feature selection. Though, the latter is merely a special form of regularization which, by design, favors the generation of sparse solutions.

In statistical regression or machine learning, we regularly (:D) penalize either the \(\ell_1\) norm of a solution’s vector of parameter values or its \(\ell_2\). Techniques that use the former penalty, like LASSO, encourage solutions where many of model’s parameters are assigned to zero (as we shall see in a bit). Techniques which use an \(\ell_2\) penalty, like ridge regression, encourage solutions where most parameter values are small (but not necessarily zero). Elastic net regularization uses a penalty term that is a combination of the \(\ell_1\) norm and the \(\ell_2\) norm of the parameter vector.

Suppose that we are training a neural network model to read hand written digits and we are using a loss (or cost function) \(J\) (\(N\) is the number of training examples):

The hyperparameter \(\lambda\) is controlling how large penalty we impose on the cost function. If \(\lambda\) is large, then the model’s parameters \(w_j\) must be pushed towards zero, so that the product \(\lambda \lVert w \rVert_1\) is minimized. On the other hand, if \(\lambda\) is already small, then the penalty is relaxed.

With the hyperparameter \(\alpha \in [0,1]\) controlling how much of one versus the other we use in the mixing.

Here is effect of \(\lambda\)’s value on a regression model with 11 variables and LASSO regularization.

Same idea but ridge regularization instead.

And here you can see how LASSO regularization invokes sparsity by driving some of the model’s parameters to become zero, with increasing values of \(\lambda\). On the contrary, ridge regression keeps every parameter of the model small without forcing it to become zero. 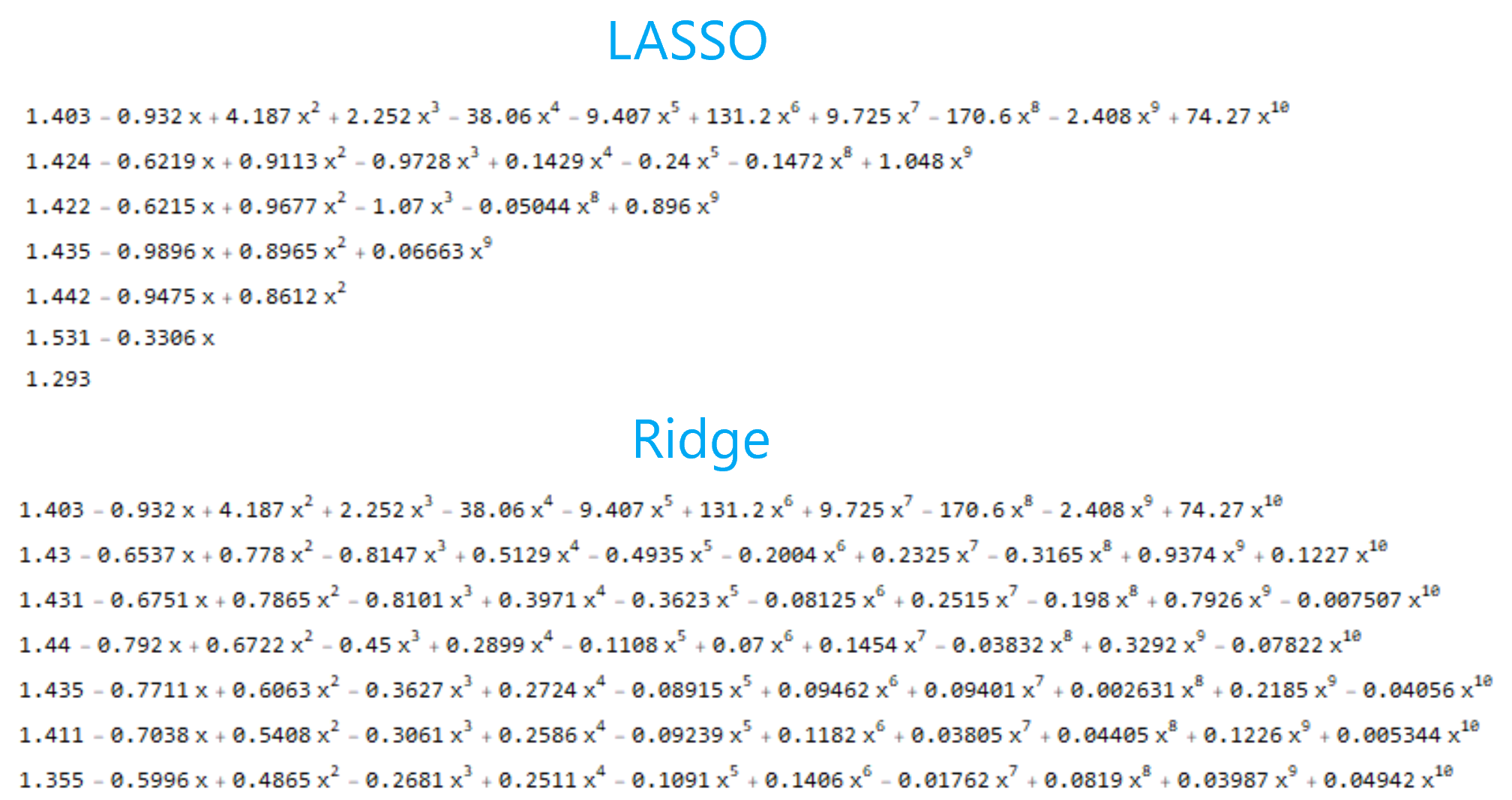 Suppose that we would like to minimize \({\lVert x \rVert}_p\) subject to the constraint \(5x + 6y = 7\), for various values of \(p\). We would start from the center of the axes and we would “blow up” our norm until its boundary intersected with the line \(5x + 6y = 7\). As you can see from the following pictures, for different norms, the optimal point (i.e. the point of the intersection) in \(\mathbb{R}^2\) is different.

And here are the same graphs superimposed. 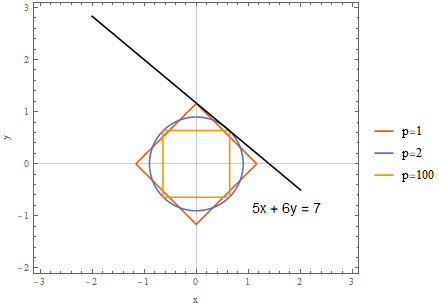 Convexity of the norms

Mind that the domain of \(f\) must also be a convex set. Here is an example of a convex versus a non-convex function.

Such functions have this nice property, optimization-wise, that any local minimum is also a global minimum. In other words, the function always dominates its first order (linear) Taylor approximation:

Convex functions play nicely with gradient descent. Now, the very definition of a norm implies that a norm is always a convex function. Let \(f = \lVert \cdot \rVert\), then: