What is EM about?

Here is an elementary example. Suppose that we have some data and want to fit a model of the form \(y = a x\). In this case, \(\theta\) is essentially the coefficient \(a\), but usually, there will be many unknown parameters. In the left image, there’s the likelihood function for several values of the parameter \(a\) (actually, it’s the logarithm of the likelihood function, but we will talk about this later). In the right image, we plot \(y = a x, \, a = -3, \ldots 7\) with a step size of 0.5, superimposed with the observed data. As you can see, \(a = 2\) maximizes the log-likelihood and fits the data better than any other line. So, fitting data to models can be done via maximum likelihood estimation.

By the way, in a previous blog post we have proven that by maximizing the likelihood in the linear regression case, this is equivalent to minimizing the mean squared error.

… in the presence of hidden variables

The EM algorithm is particularly useful when there are missing data in the data set or when the model depends on hidden or so-called latent variables. These are variables that affect our observed data but in ways that we can’t know directly. So what’s so special about latent parameters? Typically, if we know all the parameters, we can take the derivatives of the likelihood function with respect to them, solve the system of equations and find the values that maximize the likelihood. Like:

This is precisely what we did when we wanted to fit some data to a normal distribution. However, in statistical models with latent variables, this typically results in a set of equations where the solutions to the parameters mandate the values of the latent variables and vice versa. By substituting one set of equations into the other, an unsolvable equation is produced. That’s why we need the expectation-maximization algorithm. Concretely, EM can be used in any of the following scenarios:

What are the basic steps of EM? 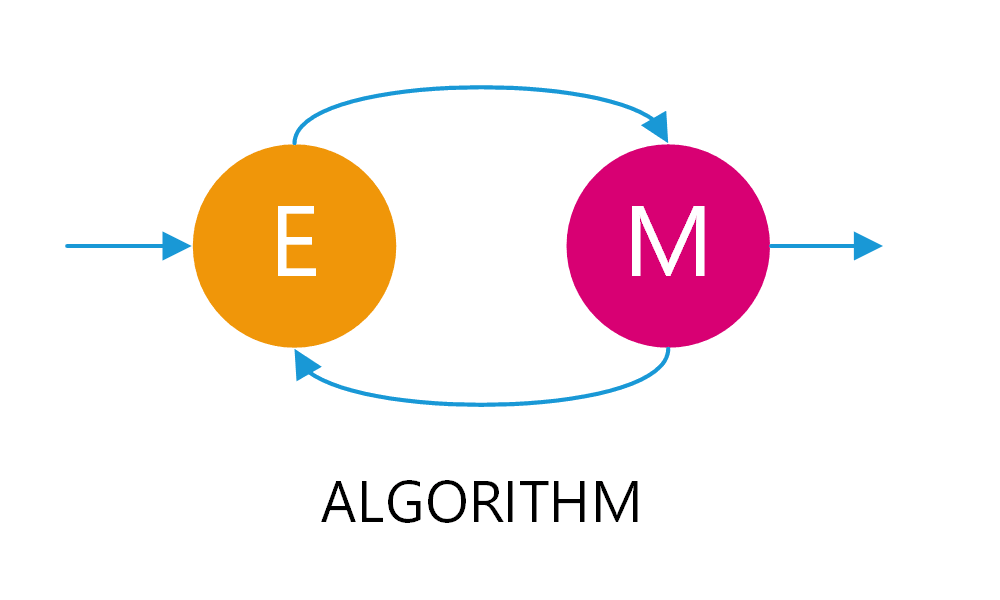 EM takes its name from the alternation between two algorithmic steps. The first step is the expectation step, where we form a function for the expectation of the log-likelihood, using the current best estimates of the model’s parameters. Whereas, in the maximization step, we calculate the new parameters’ values by maximizing the expected log-likelihood. These new estimates of the parameters are then used to determine the distribution of the latent variables in the next expectation step. Don’t worry if it doesn’t make sense now; we will show an example in a minute, and we will also delve into it in subsequent blog posts.

Setting up the problem

Writing down the likelihood function

To be more pedantic we would write:

But since it’s easier to work with sums rather than products, we take the logarirthm of the likelihood, \(\ell(\theta\mid x)\):

Brute forcing one parameter at a time

In the following examples, we will generate some synthetic observed data from a mixture distribution with known parameters \(\mu_1, \sigma_1, \mu_2, \sigma_2\) and mixing probability \(\pi\). We will then calculate \(\ell(\theta\mid x)\) for various parameter values while keeping the rest of the parameters fixed. Every time we will do that, we will see how \(\ell(\theta\mid x)\) is maximized when a model’s parameter becomes equal to its ground-truth value.

Let’s create a mixture distribution of two Gaussian distributions with known parameters \(\mu_1, \sigma_1, \mu_2, \sigma_2\) and known mixing probability \(\pi=0.3\). Normally, we won’t know the values of these parameters, and as a matter of fact, finding them will be the very objective of the EM algorithm. But for now, let’s pretend we don’t know them. 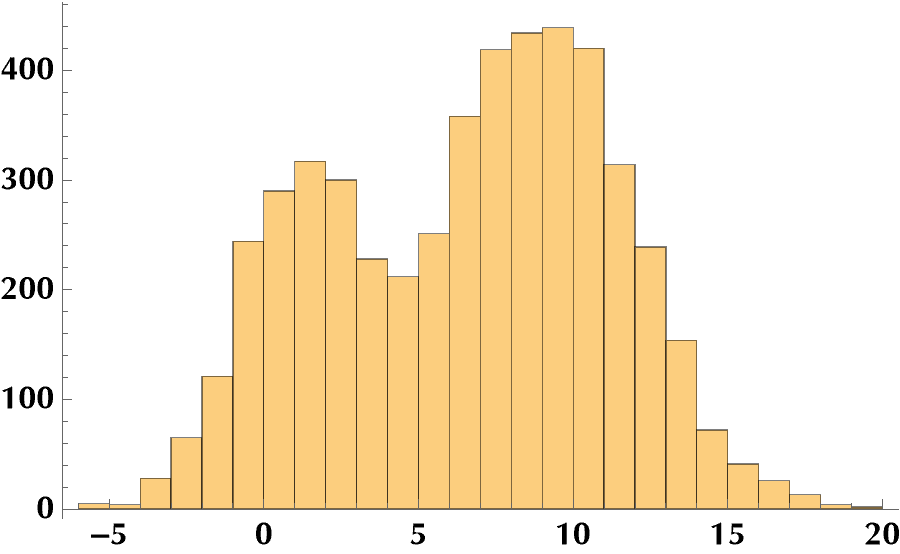 Ok, we are ready to go. We will first vary the mixing probability \(\pi\), keeping the rest of the model’s parameters fixed. In some sense, we are brute-forcing \(\pi\), to find \(\pi\): 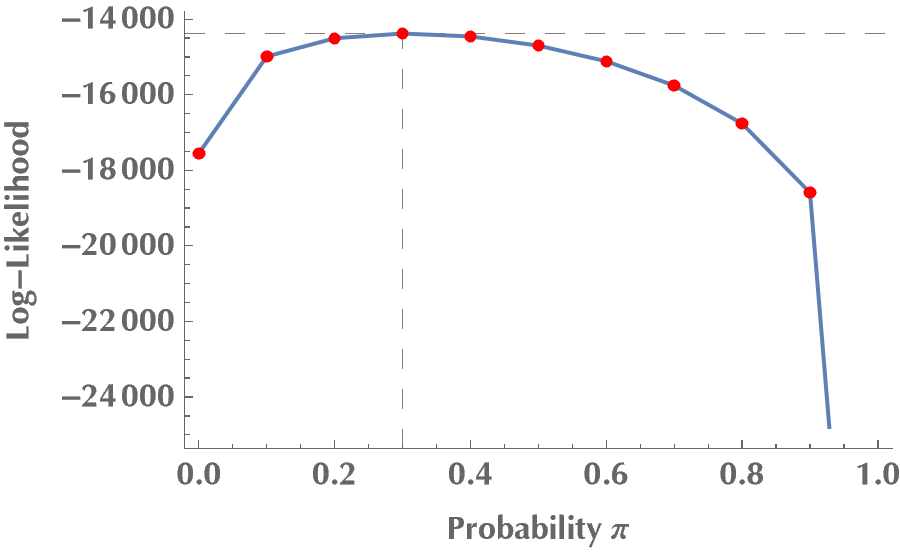 Do you see how \(\ell(\theta\mid x)\) is maximized at \(\pi = 0.3\)? By the same token, we can try other model parameters, but we will always come to the same conclusion: the log-likelihood, therefore the likelihood, is maximized when our guesses become equal to the ground-truth values for the model’s parameters.

Reformulating the problem as a latent variable problem

Previously, we varied one parameter at a time, keeping the rest at their ground-truth values. We will now get serious and seek to estimate the values of all parameters simultaneously. If we attempt to directly maximize \(\ell(\theta|x)\), it will be tough due to the sum of terms inside the logarithm. For those of you who doubt it, just calculate the partial derivatives of \(\ell(\theta|x)\) with respect to \(\pi, \mu_1, \sigma_1, \mu_2, \sigma_2\) and contemplate solving the system where all these derivatives are required to become zero. Good luck with that! :P

But, we don’t actually know the values \(\Delta_i\). After all, these are the latent variables that we introduced into the problem! If you feel that we ain’t making any progress, hold on. Here’s where the EM algorithm kicks in. Even though we don’t know the exact values \(\Delta_i\), we will use their expected values given our current best estimates for the model’s parameters! This is the expectation step of the EM algorithm. So, instead of \(\Delta_i\), we will use \(\gamma_i\) defined as:

Once we have \(\gamma_i\) calculated, we know which distribution \(x_i\) belongs to. Therefore, we can update the model’s parameters using the weighted maximum-likelihood fits. For Gaussian distributions, this is just the mean and standard deviation of the \(x_i\). This is the maximization step! Actually, \(\gamma_i\) doesn’t take discrete values like the \(\Delta_i\). Instead, it lies in the interval \([0,1]\) and, therefore, the EM algorithm does a soft membership assignment. I.e., for every \(x_i\), it assigns a probability that it comes from the 1st or the 2nd distribution. That’s why, when we calculate the Gaussians’ parameters, we use a \(\gamma_i\)-weighted average.

So, here’s the EM algorithm for our particular problem:

Here is a sample code that implements the EM algorithm for our particular problem. The code doesn’t look pretty without Mathematica’s syntax color highlighting and the Notebook’s format, but anyway. 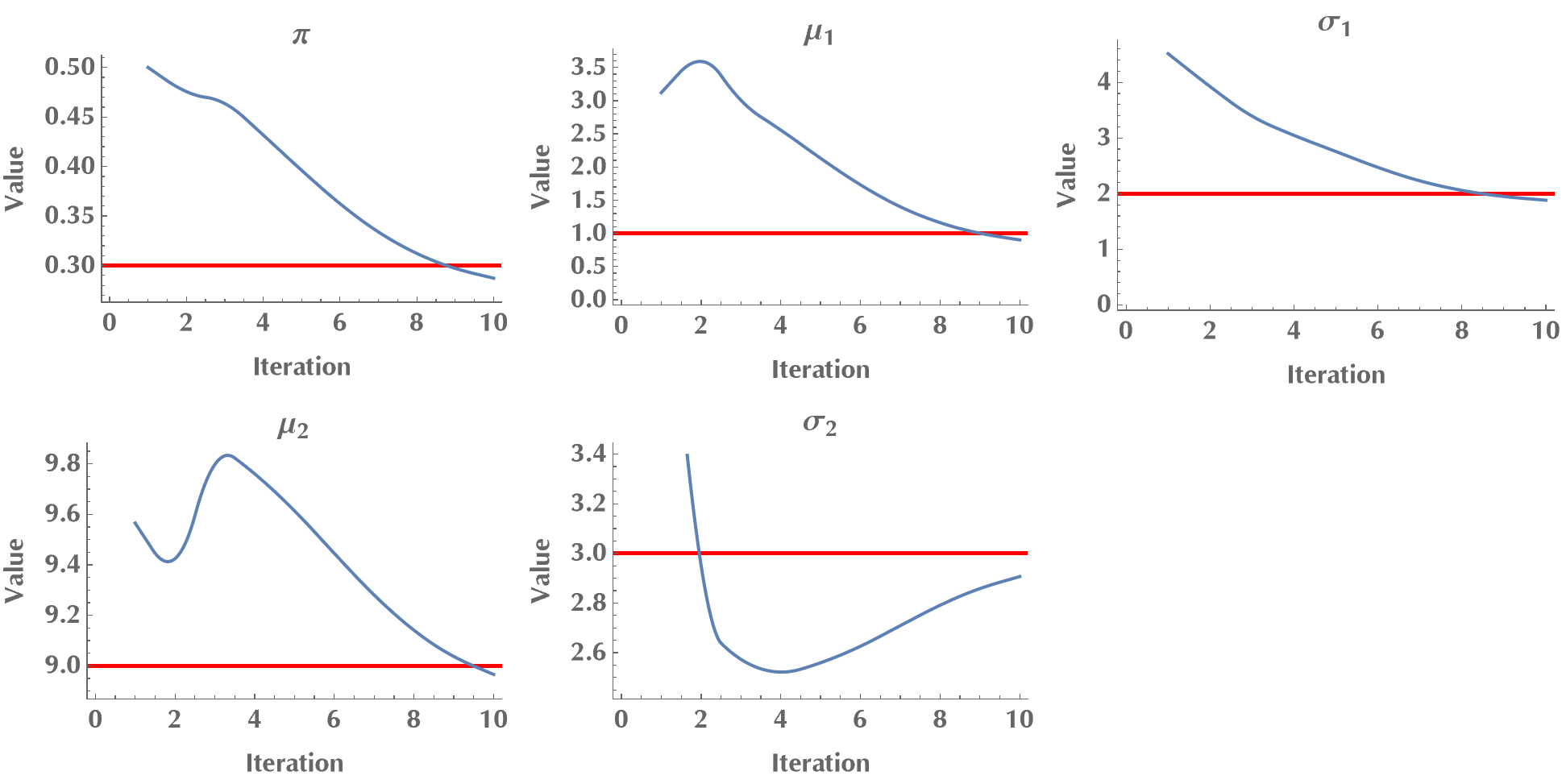 In the following plot, we see how the \(\gamma_i\)’s vary as the observed data transition from the 1st to the 2nd distribution. E.g., when we look at observed data around x=1 (or less), the \(\gamma_i\)’s are equal to zero. This means that the EM algorithm doesn’t cast any doubt on the source of these values. They were sampled from the 1st distribution. When we look at observed data around x=9 (or more), EM is confident that these values originate from the second distribution (\(\gamma_i=1\)). However, when we are in between, \(\gamma_i\)’s assume intermediate values around 0.5, conveying the uncertainty regarding which distribution each \(x_i\) belongs to. So, by applying the EM algorithm, we discovered the membership of each observed value (with some uncertainty), and we estimated the model’s unknown parameters! Neat?